I could write a whole series of blog posts about my Akademy 2014 experience, but

Therefore I’ll try to summarize some of my impressions (and provide insight into the “rusty trombone conspiracy”).

First of all, the talks: The two keynotes were both awesome!
Sascha Meinrath told us about the strong connection between Free Software and political activism in the opening keynote, and how crucial our work in Free Software is for a future where citizens are still free instead of constantly being watched and manipulated by companies and governments. I found it very inspiring, because its political implications are one of the major factors that draw me to Free Software.
Cornelius Schumacher‘s community keynote taught us how we all benefit from our involvement with KDE and why he and other long-time KDE contributors are doing what they’re doing. It’s always great to hear the stories of “the elders”. It’s a bit like grampa telling stories from WWII. 😉
Of course there were countless other great talks, too (see also the summary of day 1 and day 2 on the Dot, and the program for video recordings and slides).

The Story Behind the Rusty Trombone

Those of you who have attended Akademy or watched the talks by Àlex Fiestas, Björn Balazs or Jens Reuterberg and myself may have wondered why a certain term came up in each of them: rusty trombone. This sounds innocuous at first, but a quick trip to your ever-helpful Urban Dictionary will reveal that, while “harmless”, it isn’t a term you should utter at a dinner party if there is a chance someone at the table might know what you are referring to.
So how did this term enter our talks? Well, it happened as follows: On Thursday morning, yours truly boarded a train in Langen, suspecting nothing. I had read about a group of Akademy attendees organizing a trip from Berlin to Brno that day, but since my connection did not go via Berlin itself, I thought I’d have nothing to do with them. Therefore I was – of course pleasantly – surprised when I saw Mirko Boehm and Patrick Spendrin at Dresden train station. I then learned that there were quite a few more fellow KDEians on that train, among them Paul Adams. Paul always has an odd story or two to tell, one of those was about a contest which was once held to find a combination of two words which, when entered into Google, would only yield Urban Dictionary or pages linking to it as the top results. One of those was “rustry trombone”. None of the other people in the cabin new what it meant (or at least pretended not to know), so Paul explained it to us, in a vivid-enough way.
Fast forward to Saturday night. We had planned to have dinner together with everyone from the visual design and usability groups (namely Andrew Lake and his husband, conveniently also named Andrew, Jens, Björn, Heiko Tietze and myself), and Àlex decided to join us, too. When I told the others about my trip to Brno, the “rusty trombone” story came up, too. Nobody had heard the term yet (or at least pretended not to have heard it) and of course they wanted to know what it meant. I found just telling them to be too easy, so instead we turned it into a quiz. It took the group quite a while to find out what rusty trombone means, and of course the most fun part were the ideas people came up with what it could be.
After the mystery was solved, someone from the group had the idea that since most of us were giving a talk the next day, we all should try to incorporate “rusty trombone” into it. Andrew opted out because – as his husband confirmed – he would not be able to continue his talk afterwards with even the least amount of seriousness. All the rest promised that all our talks would contain the magic words at least once.
I don’t want to spoil the fun for you by telling you how we (or actually everyone but myself, because I thought that having Jens mention it in our combined talk would be enough, to Björn’s utter disappointment) managed to integrate “rusty trombone” in our talks. Just watch the talks (linked above) and look and listen carefully. Àlex, Björn and Jens really mastered the art of injecting the words into their talks in a way that people who didn’t know what they meant (there were fewer and fewer of those with each of our talks, of course) probably wouldn’t have noticed anything suspicious.

For Monday and Tuesday, we had booked a room specifically for user interface design topics. The idea was that anyone could come to us to get input on their user interfaces from visual and interaction designers.
Three people used that opportunity: Jan Grulich for the Network Management System Settings module, Michael Bohlender for his email client which we now codenamed “NextMail”, and Friedrich Kossebau for “Workspace-wide services on non-file objects”. All three design sessions were very productive. In all of them, we aimed at striking the best balanced between “as simple as possible” and “as complex as necessary”, which isn’t easy when dealing with complex matters such as setting up a VPN or dealing with multiple email accounts each with a complex folder hierarchy or with mailing lists vs. regular email conversations, or with a theoretically unlimited number of services which can be offered for dealing with any object (such as an address in a text, or an image in a PDF). More details about the results of these sessions will surely pop up somewhere on Planet KDE over the next weeks.
Another very interesting session was “Human-Centered Design for the KDE HIG”: In that session, we applied one of the standard methods in human-centered design, the usability test, to the KDE Human Interface Guidelines. We had two developers (Frederik Gladhorn and Kai Uwe Broulik) test the HIG as its users. They could choose a task for which they would consult the HIG and then try to complete it live, while the HIG team observed them and then discussed with them why they got lost at a given point and which information they could not find. Friedrich Kossebau offered additional input.
The results from this are very helpful for optimizing the usability and usefulness of the HIG for developers. Some of the findings were that our users would prefer visual examples for first orientation, and text only for details which cannot be well communicated visually, that the structure of the main page should be optimized, and that more cross-linking between related articles would be helpful.

Community from the Perspective of a Temporarily Walking-Disabled Member

One of the most memorable experiences from this year’s Akademy has to do with an injury I suffered there. At some point during my travel to Brno, I got a small graze at the back of my right foot. Nothing serious, I thought, so I didn’t pay much attention to it. Unfortunately, some germs must have entered the blood stream through that graze, causing a serious inflammation. The foot got more and more swollen and walking started to hurt. It got better with each night, but worse during the days. On Sunday evening, I decided to stay in the hotel and visit a doctor the next morning. When I told Dan Vrátil about my inflamed foot the next morning, he had to laugh at first, because the exact same thing happened to Jan Grulich during last year’s Akademy. Last time, Jan had to be taken to the hospital and elsewhere by car, now he was the one driving me around.
At the hospital, the foot got bandaged and I was told not to walk. Not the ideal condition for a conference. This is where I experienced first-hand the helpfulness of our wonderful community. Whenever someone from KDE was near, I was supported while hopping about, and Àlex even carried my through the venue like like a bride over the door sill. We also found that office chairs can be repurposed as makeshift wheelchairs (including the fun of pushing someone around on one, of course).
The most difficult part, though, was the day trip to the water reservoir on Wednesday. Originally, I had thought I’d stay at the hostel during the day trip because I couldn’t even get to the reservoir without walking too much and Jan was not available to drive me there.
When asking on the mailing list whether it was possible to get there without much walking, I got two replies from people willing to give me a ride (Martin Klapetek and Teo Mrnjavac). In the end, it was Martin who took me to the reservoir (and also to the tram station the next morning). I was happy that I could take part in the day trip and take the ferry together with the group, but I had already accepted that I wouldn’t be able to get up to the castle we were visiting (castles are not exactly known for being easy to reach, right?).
When the ferry landed and I said I’d wait there for the group to return from the castle, Frederik Gladhorn said something along the lines of “No, we won’t leave you behind, we can get you there!”. I couldn’t really imagine how, until I found myself first on Frederik and Martin’s arms, then on Friedrich Kossebau’s and then Frederik’s shoulders. There are some KDE members which, due to their compact size, might be relatively easy to carry on one’s shoulders. At about 1,85m in height, though, I’m not exactly one of those, so it must have looked really funny when a fully grown man sat on another’s shoulders. I’ll add a photo as soon as I get one. The foot is now better, though it will take a few more days of rest and antibiotics to fully heal.
This was an example of what KDE means to me (and surely many others): We always help each other out, and even if something seems impossible, together we find ways to make it happen.
Thank you all for making Akademy 2014 such a wonderful experience!
UPDATE: As promised, here is a photo of me sitting on Friedrich’s shoulders and trying to avoid being slapped by a branch 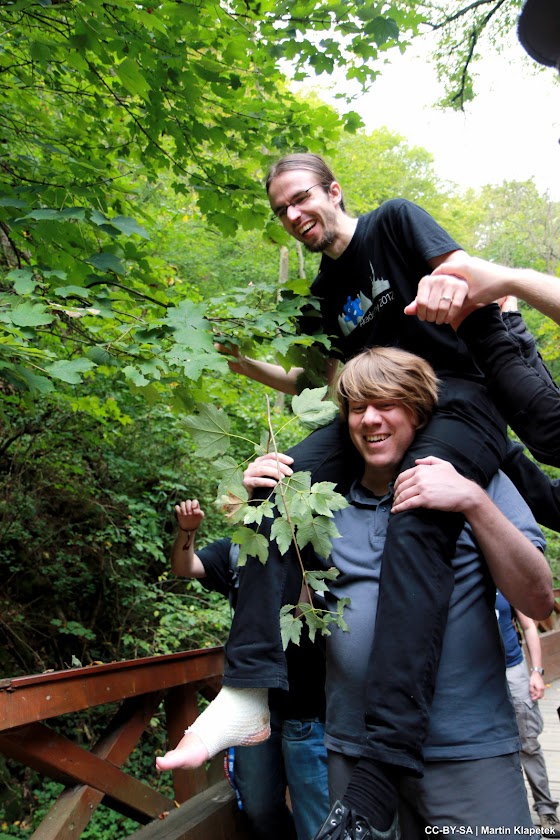